With all the #fangirling I’ve been doing over Jensen Ackles lately, it should come as no surprise to my friends and followers what I’m reviewing for Tuesday Tunes this week: Radio Company, the Supernatural star’s genre-bending collaboration with fellow Texan Steve Carlson.

The album cover, with artwork by Tom Jean Webb

The men… the myths…the inspiration..

Their debut album, Volume 1, dropped Friday, and is available for a full listen on Spotify, among other platforms. I ordered the limited edition vinyl a month ago and even though I’ve listened to all the songs online at least five times, I can hardly wait to set it on my turntable and blast it from those speakers.

I have to admit, with Ackles as a Dallas native and lover of all things cowboy, I was a little concerned the music would be a little too country, a little less fantastic than my fan-brain was making it out to be. But I shouldn’t have worried. On first listen I was blown away by this album. Yes, Ackles is gorgeous and this review gives me an excuse to post a bunch of pictures of him, but he also has an amazing voice and has done a spectacular job collaborating with some really talented musicians. What impresses me the most, though, is how many different sounds and styles are used in just 10 songs — the diversity of this album is off the charts, and Ackles talks about it in an interview with Entertainment Weekly:

As you listen through the album, you’ll notice it’s a pretty wide range of music styles. … Steve was like, ‘This album is anywhere from Motown to Metallica.’

He’s not exaggerating. It’s all. There.

Lyrically, most of the songs are more abstract than I would normally go for (which may come as a surprise to some of you), but it’s not distracting. In fact, I didn’t even notice at first, because the sounds of the words work so perfectly with the music and the singers’ voices.

In any case, the album kicks off with “Cannonball,” which offers as an explosive start as you might expect. Not from the very first second, but it won’t be long before you’re rockin’ out in your kitchen playing air guitar (though not as skillfully as “Acid Wash” Zanna).

No? Not your thing? Just me? WELL. It’s the perfect opener.

(Read what Nerds and Beyond said about it here.)

Follow that up with my favorite track, “Let Me Be,” which features some swingin’ vocals from Ackles (that sound even better when you’re watching him recording, I swear) as well as some AWESOME female back-up singers and basically a brass band that really bring it all together.

Then Ackles steps back to make room for Carlson on “Bound,” which, honestly I’m not even sure how to describe. I don’t feel equipped to express how great this song is, but I can say that the drumbeat gets you groovin’ right away, and the slight change in tone to Carlson’s voice is perfect for that low verse. I think this is the point in the album where you start to really feel the grit of it. Plus, this guy’s guitar-playing is on point.

And now we come to “Sounds of Someday,” which all us Supernatural fans heard (and probably squealed over) in last week’s episode, which Ackles directed (and of course, starred in). This one — and I hope I don’t go to hell for saying this — reminds me solidly of 3 Doors Down, which is not at all a slight, as some people might think it is (seeing as the early 2000s band seems to have almost gone the way of Nickelback, but not quite reached that point of ubiquitous mockery; I’m reminded of how Jess responded to Dean’s girlfriend Lindsay on Gilmore Girls when she said she liked Matchbox 20, which I also love…)

ANYWAY. “Sounds of Someday” is dark and sad and mysterious and perfect for the scene it’s used in, plus it’s been stuck in my head since I heard it on the show. And listening to Ackles’ voice, which takes center stage on this one, you really feel that soulful sorrow. 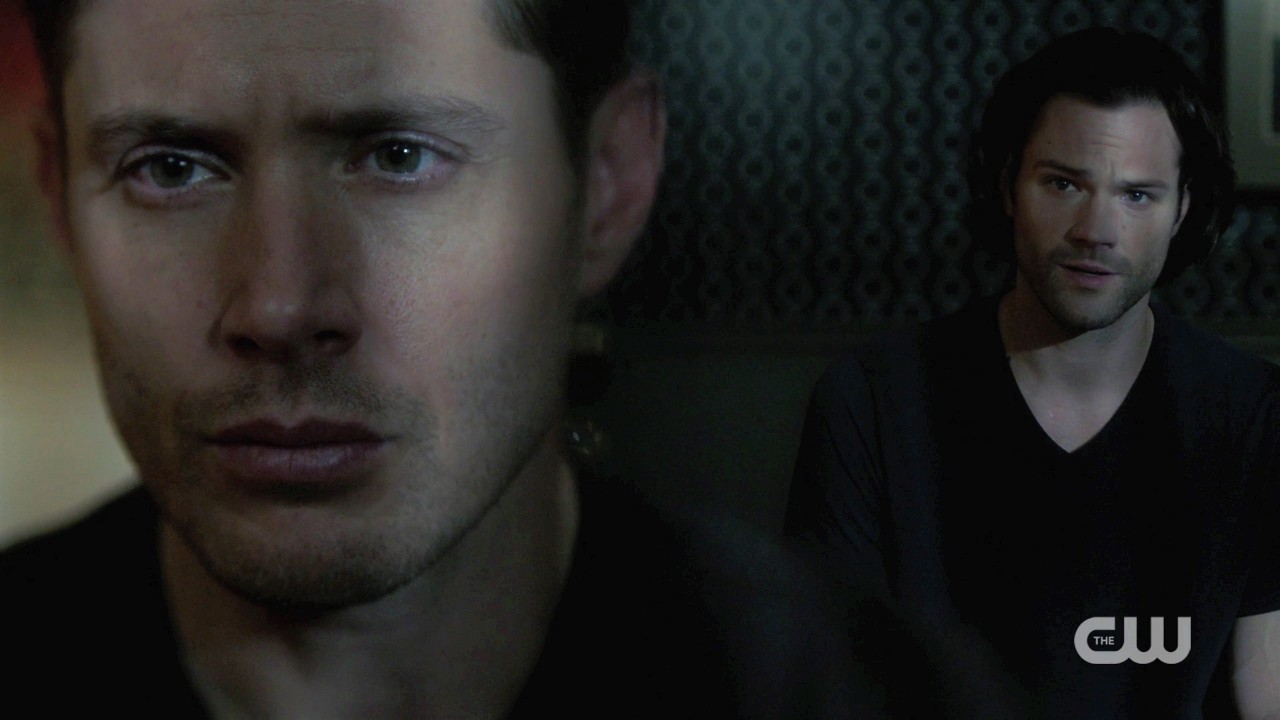 Next up is “Off My Mind,” which features both guys on vocals and sounds like a song you could do a slow swing dance to. This is the midpoint and longest track of the album, so the pacing seems right. We get a nice solo in the middle, too, which builds from chill to what I can only think to describe as passionate, again reaching toward their soulful side while clearly engaging with their love of rock ‘n’ roll. (Also, it’s got a significant Leonard Cohen vibe in the first half, IMHO.)

Then there’s “Drowning,” which might be my second-favorite track, thanks to those lovely back-up ladies and Ackles’ big first note. The songs starts with a familiar sweeping guitar solo, punctuated by my favorite movie star’s voice at about the 1:17 mark.

And I love it because he comes in hot and just doesn’t back down. Plus, Carlson is on fire on guitar again.

Ackles stars on the next track, “When I’m Down,” too, so of course I like it. However, this is one that I thought maybe could’ve benefited from a bit more elbow grease? I don’t know. It’s like, the intro’s just a little long, but somehow Ackles’ entrance still seems kind of sudden, and it feels rushed for a while. But his voice is still killer and there’s some great guitar playing on this track, so maybe it’s just that all the individual pieces are pretty good, but together they don’t match up? Maybe I don’t know what I’m talking about. As I said before, I really love the whole album as a unit, so it’s hard to hate on any of the songs.

In any case, whatever ‘meh’ I may have felt with that song is pretty much erased by “Livin in You,” which is strongly reminiscent of “Bound” and really balances out the album. They change things up a bit by putting Ackles on backing vocals with the gals we’ve come to love (Sheree Smith and Angela Miller, I just learned), which makes for a cool new dynamic, but there’s still that familiar groove, enriched by some jazzy piano riffs that I love. And it reminds me of the movie Holes for some reason — maybe that’s an effect of the Southern rock feel my husband picked up on when I “forced” him to listen to it?

The album winds down with “All Our Own” and “Dume” (which might be named for a place in Portugal, I don’t know, I had to look it up and I’m still not sure*), two slow/soft tracks that certainly belong on this album, but they’re not my favorite. Maybe it’s because I wasn’t ready to come down from the rock ‘n’ roll high and was still vibing with the more up-tempo tracks, who knows. Still, that warbling quality to Ackles’ voice during the chorus of the second-to-last song is really pleasant to listen to, and the last track has such a lullaby-like quality, I could easily fall asleep to it.

Now, on the off chance that you’re still reading this, go listen to this kick-ass album (and maybe buy it, and maybe start watching Supernatural so I have someone to fangirl with).

*”Dume” is actually named for Point Dume in California, as alluded to in a clip of an interview with Steven and Jensen posted on Instagram 11/18/19

Made some recycled art.
#winter #alaska #nofilter
First time in charge of Thanksgiving dinner (with help from @seanbuxbaum) and I think it turned out pretty well! Turkey meatballs, roasted tomatoes and potatoes & onions, cauliflower mash, pan-fried asparagus, baked apples, mulled wine, and pumpkin white chocolate cheesecake with ginger snap crust (made by Mom). Phew!
📷 cred to Dad
'Where are all the deer??'
Tonight on Zoom! 6 pm AKST.
Practicing with the boomstick yesterday. T-3 days until Missouri!
Not my greatest performance but always good to get behind the mic (and at least I looked cute doing it)! Second photo cred @black_birch_books
Forgot to post yesterday; still thinking about that impressive Audrey 2. Mad props to the director and his dad. Also, hadn't seen a rendition of this since high school, and still remembered most of the songs! Crazy.
Back in charge of my own classroom (which I decorated today), teaching middle school students, no less. Unreal.
Conference time! Not overwhelmed or anything 😅😵‍💫 #AKWriters2022 #awgconference #AlaskaWritersGuild
The #awgconference starts TOMORROW 😱 See you at the Loussac @anchoragelibrary in the morning! #AKWriters2022 #AlaskaWritersGuild

O/H in the Newsroom